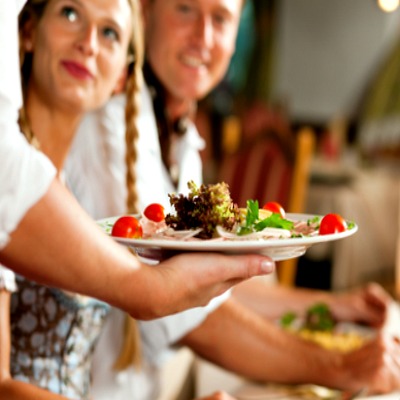 On Sunday, Oct 21st the Kiwanis Club of the Delta sponsored the Antioch Pride of the Delta Restaurant Tour. For only $15 you could visit and sample food from 12 of Antioch’s restaurants. I joined the fun and took some pictures to share.

These are the local Antioch restaurants that participated.

Keep reading for my personal experience on the tour…

The Start of the Antioch Restaurant Tour began at Lone Tree Golf & Event Center. You can start the tour at any one of the eleven participating restaurants but I needed to see Kay Power, one of the Kiwanis Club of the Delta event organizers, to get my ticket.

Once I had my ticket I hit the mini-buffet for some tortellini alfredo, chicken fajitas and bacon wrapped meatballs in a savory sweet glaze. Nice start!

On to Starbucks where it was time to coffee up and taste their newest dessert offerings. I especially enjoyed the cinnamon topped coffee cake.

After that, it was Little Manuels Mexican Restaurant, where rice, beans, homemade flour tortillas, and three meat fillings were available so you could make your own burrito. Also, there was a nice array of homemade desserts was available. I couldn’t stay away from the homemade cheesecake LOL.

Next stop was the Red Caboose where they offered several homemade soups and a chili. With chips, cheese, onions, and salsa folks were making a nacho plate.

River Town Sweets is a new business and offered each person on the tour two selections. I don’t know if they were watching their investment or testing the market for what desserts Antioch prefers. I thought that was pretty smart. Most people would take some of everything but when you could only eat two you had to choose wisely. Me? I choose the lemon square cookies and a pumpkin spiced cake, very tasty!

Smith’s Landing was next on the list for me. They were offering Seafood Balls with a “chipotle” dipping sauce. I was a little hesitant to try it fearing a strong fishy taste would ruin the rest of my tour. Not to worry the appetizer tasted like a creamy crabcake, very delicious, very appreciated by everyone I talked to.

Freddy B’s BBQ was next and these folks were a hoot. They were offering us pork ribs and tri-tip. I wish they would have included a few sides, who eats BBQ without sides of potato, macaroni, cole slaw and or beans?

The last leg of the Antioch Restaurant Tour began at Celia’s Mexican Restaurant which offered a make-your-own-taco-bar and Enchiladas Verdes. I personally want to thank my friends at Celia’s for helping out with this fundraiser again for the 14th year in a row. It’s one of my favorite stops all year.

Southern Cafe was serving fried catfish, dipping sauce, and collard greens. The server was cute as a button and all smiles and was there to please. Thank you.

Last but not least was  Skipolin’s Pizza another regular on this tour. This popular pizza restaurant is another business that makes this Antioch Restaurant Tour fundraiser well worth the $15 ticket price.

Martha Parsons is a key player in this effort along with Kay Power. We have them and all the others to thank for this. No wonder this is a sell out every year. If you joined the tour, I’d like to hear your toughts and experience. Please comment below and let me know how you enjoyed it.